We work in close collaboration with the Maronite Eparchy of Mexico thanks to Maronitas.org which is the official site of the Eparchy in South America.

Why Federalism for Lebanon ?
KAFNO(Famine Genocide)
SEE BELOW

Tur Levnon is based in Brooklyn (USA) and Zalka (Lebanon). It was founded in 1999 but registered much later in 2005 under the name “Knushto d’Marduto Suryoyto”. In 2017, it merged with other groups and associations to form the Syriac Maronite Union under the name of TUR LEVNON. Its active members are mainly in America (USA), Sweden and Lebanon.

While several religious and secular organizations in Lebanon provide Syriac language teaching courses, the candidates for learning remain very few. The Union’s aim is therefore to reach people and potential students and show them why it is necessary to learn Syriac.

Syriac is the language and hence the identity of the Christians of the Levant and Mesopotamia (from Lebanon, to Northern Syria, Southern Turkey and Northern Iraq). This region was a Syriac land before the creation of these modern states.

Syriac is extremely important for Lebanon because it is its living identity. When Proto-Canaanite was Hellenized and Christianized, it became the Syriac language and culture of modern Lebanon that will be established as an entity in 685 by Maronite Patriarch Saint John Morun.

Today, Lebanon contains the largest concentration of Christians in the Middle East. Unfortunately, due to political reasons, Syriac language, culture and history are erased and untaught in schools (even in Christian schools).

To fill the gap, the Syriac Maronite Union takes action on two levels: Society and Authority.

Concerning civil authorities:
– Inviting MP and government ministers and representatives to all our events to make them continuously involved in our struggle for the revival of our Syriac language and culture.

Concerning ecclesiastical authorities:
– Encouraging them in reintroducing Syriac in the Maronite churches and mass.
-Showing them the importance of Syriac not only for our identity but also concerning our faith and spirituality.
– Using Syriac to reunite Maronites of Lebanon with the Diaspora, but also to reunite all Christian branches in a common culture and on an ecumenical level.

The Union’s main action can be summarized in four points:

The Union’s activities take place on several levels and different fields mainly educational and social aid for christian families in need.
Next to numerous meetings we always hold with Lebanese youth, students and Syriac organizations from the Diaspora,  we are also very active on social media and on the field.
Below is the list of our main activities since our inception:

We post on “Maronites” page (19 000 followers).
Our posts are about the Church, Lebanon and Syriac language.
Languages used in this page: Lebanese, Syriac, English, French.
Our facebook page is  TUR LEVNON
TUR LEVNON is also on Twitter.

SOCIAL AID
Tur Levnon has provided in November-December 2020, 30 laptops and 30 Ipads for Children that couldn’t afford to continue their studies online.
Due to the double catastrophe of COVID 19 and the economical collapse in Lebanon, it became impossible for Tur Levnon to continue working only on the cultural and identity fields. It had to provide the maximum help for families in distress.
Therefore, Tur Levnon also distributed envelops with 500 000 LL to 60
families just before Christmas 2020.

2021 June 8: Dr Amine Iskandar article in l’Orientlejour about the importance of the language in the formation of the nation:
https://www.lorientlejour.com/article/1264453/la-langue-dans-la-formation-de-letat-nation.html
2021 June 5:

2021 May 12: Webinar of MEIRSS. Dr Amine Iskandar stresses the importance of preserving our syriac identity to be able to survive in Lebanon.

2021 February: On OTV Father Elie Kesrewani explains to Habib Younes why lebanese language is in fact an arabised syriac language.

2021January:     Father Georges Sadaka thanks Tur Levnon’s president Dr Amine Iskandar for leting us realise we are not chicken but proud flying eagles.

2020,  December: Message of Charles Malek to the maronites as shown by Dr Amine Iskandar:

2020, October: Many laptops are distributed to children to help them following their school courses online.

2020 August: Vice president of Tur Levnon Raya Boustany talks about the importance of syriac for the lebanese people:
#Syriac is our #language and our #spirituality ܣܘܪܝܝܐ ܗܘ ܠܫܢܢ ܘܪܘܚܢܝܘܬܢ
https://tur-levnon.org/wp-content/uploads/2020/11/RayaSyriacidentity.mp4

2020 July: Social Help for lebanese in need to keep them rooted in their country.
https://tur-levnon.org/wp-content/uploads/2020/11/Ne7na-7addak.mp4 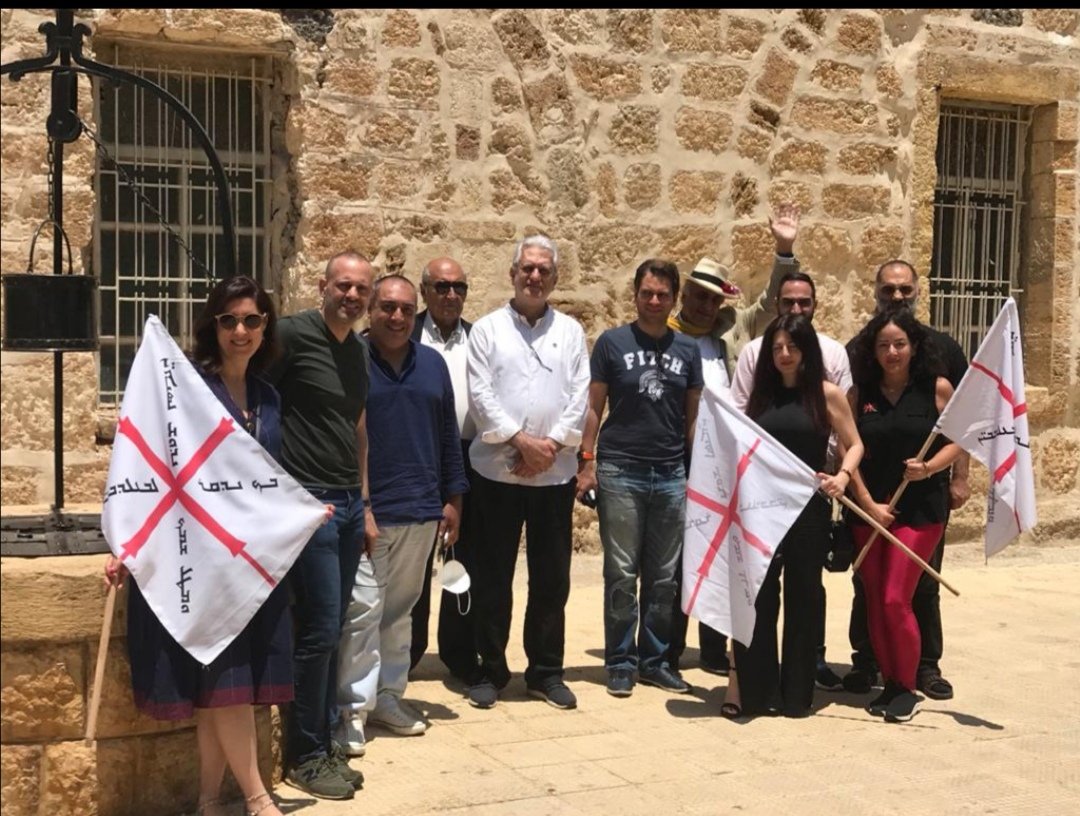 https://youtu.be/TbCa7TCyuwY
2017: July: Visits to Maronite bishops: Habib Chamié of Argentina, Youssef Mouawad of Zahlé, Michel Aoun of Jbeil, Paul Matar of Beirut. We also met with Abbot Nemtalla Hachem, superior of the Maronite Lebanese Order. He promised all his schools will start teaching Syriac to children.
2017: Jun 09: Visit to Father Yohanna Yeshoua Khoury Professor of Syriac language at the Lebanese University.
2017: May 30: Visit to Father Boutros Azar Secretary General of Catholic Schools in Lebanon.
2017, May 20 : First Syriac Maronite Congress in New York : Launching of Tur Levnon in the presence of Maronite bishop of America Gregory Mansour.
2017: May 11: Visit to Patriarch Cardinal Mar Bechara Petros Rai in Bkerké, to announce the creation of Tur Levnon and the New York Congress.
2016, August: Letter to Pope Francis for the revival of Syriac language in Lebanon.
2012, August:  Letter to Pope Benedict XVI for the revival of Syriac language in Lebanon. Also published in L’Orient-Le Jour in August 2012TUR LEVNON  IN THE MEDIA

2019: Jully 8: Father Jean Maroun Helou (founder of Tur Levnon) on Suroyo TV: the Maronite Church’s interest in Syriac as a link with its Diaspora and Lebanon

2019 May in medium: english translation of Kafno from L’Orient-LeJour: https://medium.com/@AsAbove_SoBelow/kafno-7757e64b3569

2019: April 22: Kafno, by Tur Levnon, at the Genocide Memorial (in Jdeidé municipality),organized by the Syriac international Union:

2018: May 16: Télé Lumière. Received by Ralph Tawitian to talk about the Lebanese University conference on May 18: https://youtu.be/wJuq-Xe6tLo

2017, December 6, Radio MBS, about Syriac identity and about the 2017 Christmas events of Tur Levnon from December 8 to December 21:

2017, December 4, Suryoyo TV Sweden, about Syriac identity and about the 2017 Christmas events of Tur Levnon from December 8 to December 21:

2017, December 2, MTV, about the 2017 Christmas events of Tur Levnon from December 8 to December 21: https://l.facebook.com/l.php?u=https%3A%2F%2Fwww.youtube.com%2Fwatch%3Fv%3D0nAhnpqBAHM&h=ATOMZTe8sPeIjSMTZm3ogv-IkLxcxWcYUSeD4XWK0Gn6YFmSf-thatPtayZZu5EnFo8on9qsrVeMa_974JbL9UuG2zWvbTB2wICLlSE8Zz6n76GoyzM&s=1&enc=AZPaykVXI85f-F0m6KyuvVc8NWflo4JQF7MdAI6SazNS8KvjZOykn5tjQrv-r10ListkPsmMAAqcv_S9rM0HxXTZ

Since 2004, we participate in the teaching of Syriac language at the Association of “Friends of the Syriac language”, Bauchrié, Beirut.
Since 2013, Daniel Asade (Ph. D. in SYRIAC PHARMACOPEIA at the University of Buenos Aires) is assisting Prof. dr. Pablo Ubierna for the Syriac Culture Seminar.